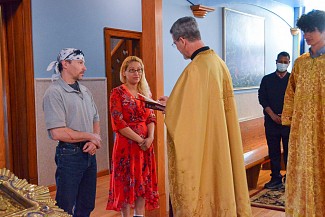 On Sunday, March 14, the community of St. John the Baptist Orthodox Church commemorated the Expulsion of Adam from Paradise along with Forgiveness Vespers immediately after Divine Liturgy.

Just before Divine Liturgy, two new Catechumens were initiated. Michael and Gricelly have begun their journey towards communion with the Church. Fr. Silouan met with them over the past several weeks and now they were ready for the next step; to officially enter the Catechumenate. May God Grant Gricelly and Michael Many Years!

Following Liturgy, Forgiveness Vespers were celebrated, and all those gathered took part in a “modified” program - as close contact is still questionable, parishioners gathered on either side of the church and as one asked for forgiveness from the opposite side. All were encouraged by Fr. Silouan to seek each other out and seek forgiveness in manners that were comfortable to all. Father also urged those gathered to seek forgiveness from everyone they encountered during the week as we begin the Great Fast.

Following services, the parish sang “Many Years” for Tyler Ferenchick for his birthday, and for Fr. Silouan and Madre Emilia on the occasion of their 24th  Wedding Anniversary. Those gathered then met in Repella Hall for a Cheesefare Sunday potluck luncheon.

Share This:
Powered by Orthodox Web Solutions
Home | Back | Top